Illinois is now in Phase 1B of the Vaccination Rollout. Find more information here.

Illinois Resurgence Region Tiers and Metrics can be found here.

Most insect species are beneficial to humans and the environment. Unfortunately, their habits sometimes bring insects into conflict with humans. In nature, clothes moths and carpet beetles live in or near the nests of insects, birds and other animals where they are valuable consumers of shed hair, horn, skin and feathers that would otherwise accumulate and foul the environment. It may be surprising to know that these and similar materials also are found in many items we value, including wool clothing, leather goods, furs, and rugs made of natural fibers. Some silverfish can digest the cellulose in plant fabrics including cottons and linens. Other insects occasionally damage fabric, though they cannot digest the material itself. They feed on organic matter contaminating the material. Clothing is often stained by urine, perspiration or skin secretions, making it palatable to some insects, including cockroaches, crickets and earwigs.

Clothes moths and carpet beetles are among the very few insects, fungi and microorganisms that are capable of digesting keratin, a protein component of feathers, hair, fur, horns, antlers, hooves, nails and beaks. Clothes moths, however, prefer to feed on items contaminated with organic materials such as spilled food, body fluids, fungal spores or pollen.

All moths and beetles progress through egg, larva, pupa and adult stages. Often most of the eating and damage is done by the larvae. They are capable of feeding on a wide variety of items, and do so usually undiscovered until after damage is done. Adult clothes moths and carpet beetles may not eat at all. 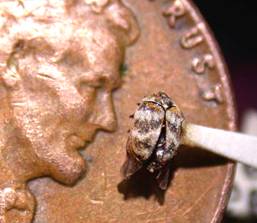 Carpet beetles may be the most common, and most commonly overlooked, pests in homes. They belong to a group of beetles known as dermestids. Named after their habit of eating dead skin, dermestids actually consume a wide range of non-living animal and plant matter.

Some animal products consumed by the larvae of carpet beetles are: hair, fur, wool, leather, hides, horn, antlers, taxidermy specimens, carrion, and dead insects including those in insect collections. Plant materials attacked by the larvae include grain, seeds and nuts, rodent bait (made from seeds), as well as pet and human foods.

Most carpet beetle larvae are one-fourth of an inch long or less, somewhat wormlike and often hairy. The hairs can irritate skin upon contact, and airways if inhaled. Feeding larvae leave irregular holes and their shed skins in and on infested items. Piles of powder, like fine sawdust, may accumulate when harder items such as, horn, antlers or dead insects are fed on.

Adult carpet beetles are round to oval in shape and usually dark in color. Indoors, they are sometimes noticed crawling on walls, mostly in spring. Outdoors, they may be found around flowers, feeding on pollen. The tiny larvae have tufts of dark hair which they raise when disturbed. The larvae of these species feed on animal products, especially pet hair, dander and dead insects. Larvae and adults are no more than one-eighth of an inch long. 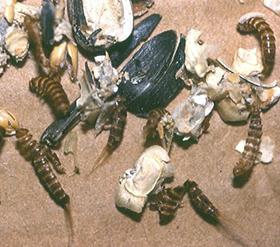 This species is considered both a fabric pest feeding on woolens, and a stored product pest that infests grain. But larvae of the black carpet beetle feed on both plant and animal products. The larva is up to one fourth of an inch long and carrot-shaped, with a fan of long hairs on the tail end. Adults are about one-eighth of an inch long, dark brown or black, brown-legged, bullet-shaped beetles.

Dermestids known as cabinet beetles(Trogoderma spp.) are similar in shape and color but often have some faint mottling on their wing covers. However, they feed almost exclusively on plant products such as livestock feed, pet food and grain.

These dermestids prefer to feed on hides, leather, curing meats, and dead animals. Adults are oval-shaped and up to one-fourth of an inch long. Hide beetles (D. maculatus) are used in museums to remove flesh from skeletons. The adults are black above and gray-white on the underside. Each wing cover comes to a sharp point at the rear. The adult larder beetle(D. lardarius) is dark brown and has a dull yellow band with black spots on the wing covers. The black larder beetle (D. ater) is black above and yellow-gray with black spots on the underside. It is also known as the incinerator beetle, for feeding on unburned remains in incinerators.

The wormlike larvae of these three species are nearly identical -- up to one-half of an nch long, hairy, dark brown to black, with two spines on the tail end. Just before pupation (cocoon stage), fully grown larvae will tunnel into substances including soft wood and foam insulation. 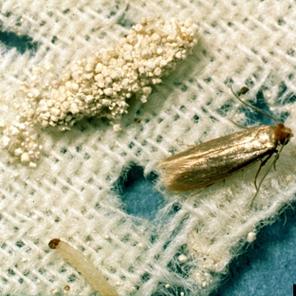 Today, with less clothing and carpeting made of wool, clothes moths are less common than they once were. The larvae (caterpillars) still graze the surface of woolens, and will feed on other items including those made of hair, fur, silk or feathers. The caterpillars are white with dark brown heads. When fully grown (about one-half of an inch long) they may crawl 10 feet or more away from the f
ood source and attach to walls and ceilings to form cocoons, emerging later as pale moths with wingspans of less than one-half of an inch.

The adult moths prefer dark spaces in closets and attics.* Adults live just long enough to mate and lay eggs which they “glue” to food sources. Development from egg to adult usually takes two to three months, but can take years, depending on environmental conditions. They thrive in high humidity.

* When small, light-colored moths are seen flying about the room during the day, they are usually not clothes moths, but one of several food-infesting moths, typically the Indianmeal moth (Plodia interpunctella). The Indianmeal moth has a broad band of copper color across the tips of its front wings. The caterpillars grow up to two-thirds of an inch long, are dull white, sometimes with a greenish or pinkish tinge, and are usually found infesting human or pet foods.

The most common clothes moth in Illinois is the webbing clothes moth. The adult has golden forewings and a tuft of red hairs atop its head. Larvae are bright white with dark brown heads. The caterpillars feed within webbing and silken tubes they spin on food sources. They leave granular, bun-shaped feces that match the color of their food. Preferred foods are wool, hair or fur, but the caterpillars also consume human foods such as meat and milk products. When fully grown, they spin silk cocoons and attach bits of food and debris as camouflage.

Most common in the southern United States, the case-making clothes moth is named for the silken case in which the larva feeds and attaches feces and bits of infested material to help disguise it. The caterpillar retracts inside its case when disturbed, and when developing into an adult moth. Feathers are a favorite food of this moth, though it will feed on variety of items including fur, wool, felt, taxidermy specimens, spices, tobacco and even drugs.

A case-making caterpillar can be distinguished from a webbing clothes moth caterpillar by the dark brown plate (the prothoracic shield) behind its head. The adult case-making moth is tan to brown with three dark spots on the front wing, though the spots are sometimes worn away.

Prevention and Control of Clothes Moths and Carpet Beetles While moth balls, crystals, and cedar oil, when properly used, will kill clothes moths and carpet beetles, they do not repel these pests. So they are actually of little value before items become infested. Many cedar chests and closets do not seal tightly enough to retain sufficient vapor to effectively kill the pests, and cedar oil typically loses its potency after two or three years.

Items susceptible to attack by clothes moths and carpet beetles should be kept clean andtightly sealed in plastic bags or containers when not in use. Newly hatched larvae are tiny and can easily enter through cracks less than one-sixteenth of an inch wide. Carpets and rugs made of natural materials should be regularly vacuumed. Structures also should be kept free of animal nests, e.g., bird, rodent. bee and wasp nests that attract clothes moths and carpet beetles. Dead insects should not be allowed to accumulate indoors. In addition, any susceptible items should not be brought into the structure before any pests they harbor are eliminated.

Control methods are essentially the same for clothes moths and carpet beetles: identify the pest, locate infested items, discard or treat infested items. Often the damage done by these pests is our first indication of their presence because they often go unnoticed until large numbers are present and damage is apparent.

Identification of the adults and larvae often requires the services of a knowledgeable pest management professional or an entomologist. Identifying the species and knowing its habits can help locate the food source(s). While inspections for stored food pests focus on the pantry, inspections for clothes moths and carpet beetles can involve the entire structure, scrutinizing places often overlooked, such as spaces above false ceilings, closets, attics and crawlspaces.

Traps can be used to alert residents to new infestations, to pinpoint sources of infestation, and to monitor pest activity. Pheromone traps use chemical scents attractive to specific pests. Traps can be purchased that attract clothes moth and carpet beetle species. Once attracted to the pheromones in these traps, pests landing on them become stuck on the traps’ adhesive surfaces. Pheromone traps should not be confused with standard pest monitors (sticky traps) that do not contain pheromones and are not likely to capture clothes moths or carpet beetles.

When a food source is discovered, it should be discarded. If the infested item must be saved, it can be cleaned or treated. Infested clothing and fabric items can be dry cleaned, washed and dried using the dryer’s “hot” setting, and/or ironed. Steam cleaning of rugs and other items also can be effective.

Placing infested items in the freezer (at about 5 F) may take weeks to kill the pests inside them. Cold storage freezers (at about -20 F) can eliminate pests in two to 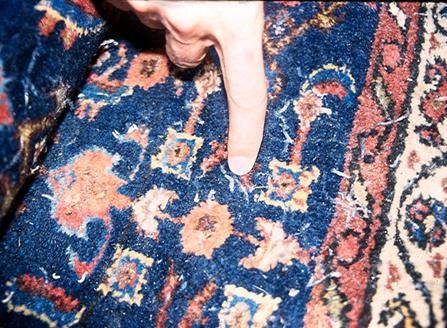 seven days, depending on the size of the item. Items to be frozen should be sealed in plastic bags with the air removed to help prevent frost damage.

The use of pesticides for control of clothes moths and carpet beetles is not often warranted. Pesticides should never be relied upon as the primary means of controlling them but, if necessary, can be applied by pest management professionals. Dust formulations, such as those containing boric acid, silica gel or diatomaceous earth, can be effectively applied to carpet or fabric items allowed to lie flat, but may take weeks to eliminate the pests. While all pests in an infested item can be quickly killed by fumigation, this method requires professional expertise and is usually reserved for expensive items and museum pieces. Store-bought total-release aerosol “foggers,” like surface spraying, will not kill pests deep inside larger items.

Moth balls, flakes or crystals (containing naphthalene or paradichlorobenzene [PDB]) also will kill pests when used in sufficient amounts (per label directions) inside tightly sealed containers and closets. Place the material between sheets of newspaper to avoid staining and to maximize circulation inside the container. Keep the container at room temperature or above for at least one month.