All Illinoisans 16 years of age and older are eligible for the COVID-19 vaccine.
Find your nearest vaccination location here or call (833) 621-1284 to schedule an appointment near you.

This key is intended to aid in the identification of unfed ADULT ticks. Ticks shorter than 3mm (1/8-inch) are usually immature and more difficult to identify. These should be sent to experts.

YES: This is the lone star tick (Amblyomma americanum) . These ticks are more common in the southern half of Illinois. They have long, narrow mouthparts (as in the illustration above) and their bodies are somewhat round in shape rather than oval-shaped like other ticks. Lone star ticks can transmit tularemia and other diseases including one similar to Lyme disease but milder.
NO: This may be a brown dog tick (Rhipicephalus sanguineus) . The brown dog tick is oval in shape and has shorter and thicker mouthparts than some other ticks. It feeds primarily on dogs and can be found in kennels and other places where dogs live. Of the ticks mentioned here, this is the only tick that can reproduce and become problem indoors. This tick seldom bites or transmits disease to people.

The Adult Female, Adult Male, Nymph and Larva of Ticks Most Likely to be Found on People in Illinois (from the U.S. Centers for Disease Control and Prevention) 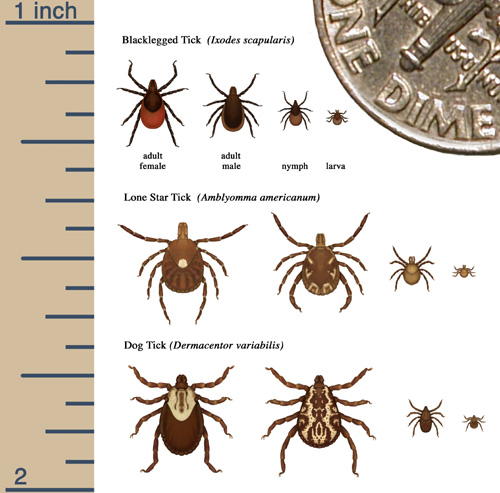 If you need help identifying a tick, spider, insect or other type of arthropod, you may send the specimen for identification in a sealed, rigid container, such as a screw-cap vial or plastic medicine bottle, with contact and collection information using the form in the right-hand column.